Referencing a connected value as a pipe parameter

Method of easily referencing a connected value as a pipe parameter would be of much help.

@Ashley, this is a great suggestion and one we’re strongly considering adding.

There’s really only one reason we haven’t added it (yet). The extra database calls which will drastically slow down the form submissions might end up backfiring. I’ll add some furter context to clarify. Each form submission generally requires several thousand database requests to complete a full submission. (Form, validation, submit, record rules, table rules, webhooks, logging, emails, texts etc). We haven’t added any limitations but hope users will understand that adding 20 tables rules, 10 emails and a dozen record rule will imact their submission time. Now, adding pipes into this equation means we also have to worry about the 3rd party pipe response which often happens out of the scope of Tadabase. To eliminate too much fuel to this we decided to limit a bit what can be done in Pipes.

Like everything we do, its a fine line between adding functionality like you mentioned and keeping things running as smoothly as possible.

I’ll discuss internally with Hitesh and we’ll measure the imapact this has. Perhaps, we can revisit and add this soon.

I completely understand Moe, thanks for the response!

We have an Automation solution that calls a 3rd party API and queries stats for each user on that 3rd party device. The devices are stored in a table that includes the API token required to make the query.
Because we can’t reference values in the Connected device table, we have to replicate the device’s API token value to every user in our users table. Traditional DB structure would frown upon this unnecessary replication but we have to due to the limitations of the current implementation of Pipes. I completely agree - can this be considered for a future improvement?

Thank you for voicing your concern over our newly released feature allowing connected values as pipe parameters. 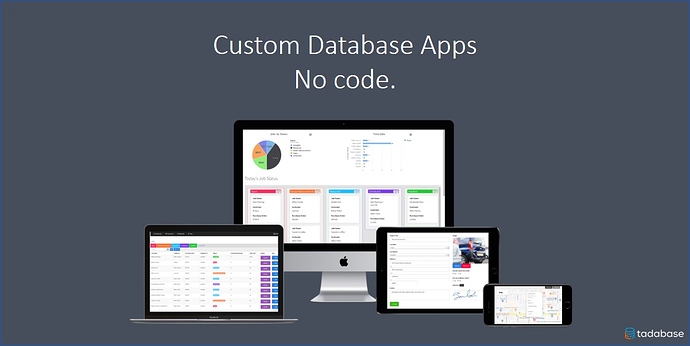 As you aware, we have started a discussion internally and you will receive updates for any new developments.

To clarify for anyone else viewing this topic, the feature listed above is currently only available in form record rules.

Apologies for closing this thread prematurely.

Is there a plan to allow connected values in pipes with action links and tasks?

I have been scratching my head trying to figure out why I have not been seeing connected fields in Pipes even though it has been mentioned as a released feature. I finally figured it out, that it is a feature in record rules on forms, and then I saw this post confirming it. This would be really nice to have as an option in the other areas you can use pipes. Particularly in table rules, tasks, and action links (in order of desire). I would think it would be beneficial in validation rules as well.

Is this something that is on the horizon?

Another way I could see accomplishing this is through chained Pipes like in Make or Zapier. Is that something on the horizon at all?

y nice to have as an option in the other areas you can use pipes. Particularly in table rules, tasks, and action links (in order of desire). I would think it would be beneficial in validation rules as well.

Is this something that is on the horizon?

I too would be interested in seeing connected fields being available in Pipes when used with Database Record Rules, although not a massive priority for me right now as I’m just copy the value from the parent record down into the child record for the moment. 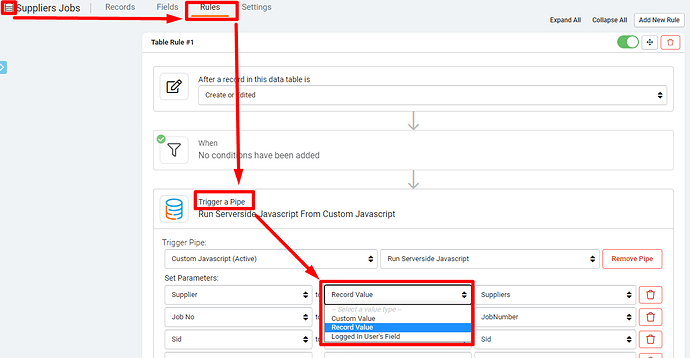 @moe This would be really nice to have in pipes within action rules as well as task. Is there a reason why forms can have it but not action links and tasks?

@moe @Chem @tim.young I know we can’t have everything we want, but is it too much to ask to have connected values in pipes when used within ACTION LINKS, not just forms? I just don’t understand why only forms can employ connected values in pipes. This is really hurting my ability to utilize Tadabase in ways I need and I know I am not the only one. Thanks!!

There’s really only one reason we haven’t added it (yet). The extra database calls which will drastically slow down the form submissions might end up backfiring.

Still on our to-do list for after we add throttling to the action links.

Hi @moe is this planned soon or a little way off yet? (That being, you can’t select a connected field on a database rule when setting a pipe’s Trigger)

Hi Moe, is there any plan on allowing connected values in pipes when using action links and/or scheduled tasks? I really need this and I believe I can speak for many others as well.