Pop up form before emailing

When clicking an action link to email someone, for my case it’s a contact connected to an event record, a form could pop up asking for further information before emailing. Such as:

Maybe, this could go as far as letting you enter the email body as well. Turning the emailing feature into a nearly full featured email solution.

To piggyback off of @tim.young’s posting…

I would full support the option of being able to email multiple addresses that have a certain “tag” or classification such as a group assignment field.

Not a full solution, but how about instead of using an action link you use an edit link and set the edit page to show in the pop up. Then you have lots more customization to continue making these types of tweaks in a form vs action link. Action links are really just that - a single click action. It will never be possible to have action links that open additional details/pop ups. Those can be accomplished with detail pages or edit pop up pages.

If you have an edit link you can open the column settings in the table for that link and choose to open it in a pop up.

That’s a pretty good idea. So let’s say I had fields in my data table that were {to} {subject} {body} etc, can I use record rules or table rules to set blank values to those fields after the form is submitted and an email is sent?

Edit: I just remembered seeing this infographic in the docs. So I guess what I asked above would not work. I’ll leave this here for visibility. 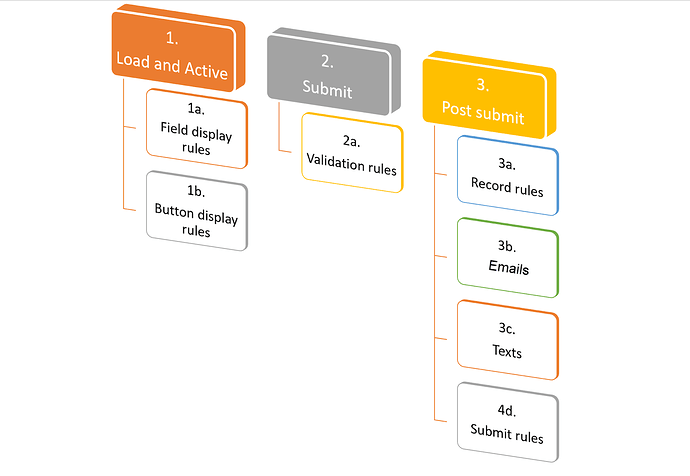 Oh I see what you’re trying to do.

Emails run after record rules so that likely won’t work. But if you use a pipe instead just add the pipe with email to the top as a record rule, then set the next record rule to null those values.

We have a SendGrid pipe which will do just that. I don’t think its published yet, but I’ll be sure to make it active tonight so you can do this. You’ll just need an API key from SendGrid and they have a very generous free tier so you likely won’t need to pay anything to use their API.

SendGrid will work just fine. I know this goes against what you’re trying to do with pipes but I just realized that this would be possible to do with Integromat as well. They have a stand-alone email module.

Is there anyway to access the native Tadabase email functions from a pipe?

There’s no way to access the native email functions from within a Pipe. But we use SendGrid behind the scenes so technically its nearly identical. Main difference is that using a pipe the email doesn’t get logged.

I activated the SendGrid Pipe.

That’s pretty much it.

Pipes are still kinda confusing. We working on slowly optimizing and making it easier to use. Let me know if I can clarify anything further.

Thanks Moe. I think that’s a really solid solution for this.

@moe, with the Pipe would it be possible to send an email to all users or records that have a certain classification? For example, “to” could be all users that are “supervisors”.